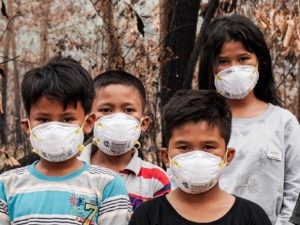 This year the dry season started a bit early and at the beginning of July we had already the first fires in Kalimantan.

For more than two decades, large areas of Southeast Asia have been blighted by an annual pall of smoke during the latter part of the dry season. However, the 2015 season was extreme and the Indonesian Bureau of Meteorology, Climatology and Geophysics (BMKG) has described the crisis as “a crime against humanity of extraordinary proportions”. [1]

The smoke occurs due to fires in several provinces on the Indonesian islands of Sumatra and Kalimantan. Fire provides an easy means of clearing vegetation from land which can then be used for plantation agriculture, particularly oil palms and for land speculation. They are set in primary and secondary forests, but the most extensive and problematic location is in the massive areas of peatland, dried remnants of the former peat swamp forests, which have been largely cleared and drained by canals. Once established, peat fires are almost impossible to extinguish, as these fires can continue to smolder deep underground for weeks. Smoke rises eerily from the bare earth.

Source of the smoke haze:

The peat may be many meters deep, and consists almost entirely of carbon-rich organic matter. It is one of the largest carbon storage deposits in the world. Its destruction constitutes an environmental catastrophe as well as a health and humanitarian crisis, because the burning of peat releases not only carbon dioxide, but large quantities of methane, carbon monoxide and other toxic compounds to the atmosphere.

According to NASA[2], the 2015 fire season was likely to be the most damaging on record, surpassing even the impact of the catastrophic 1997 fires and indeed the predictions were correct. 2015 was a year with little or no rain with an early dry season, which was extended till November, due to a strong El Niño event.

Authorities were slow to recognize the severity of the situation or to respond proportionately, and remediation efforts only started to be implemented by mid-October with thousands of members of the armed forces being mobilized, water-bombing planes and other assistance being provided by Malaysia, Singapore, Russia, and Australia. The Indonesian Government called an immediate moratorium on peatland development, and sent naval vessels to provide for mass evacuations[3], particularly of babies and small children with health problems due to smoke inhalation.

While in 2015 the haze started to produce PM10 readings in the scale of “Unhealthy” by end of August, this year by August 1st, the readings were already in this category with peeks of “Very unhealthy” and “Dangerous” readings. By August 21st a three day strong rain brought relief but it was not enough to keep the land and vegetation wet enough and by beginning of September the levels went back to “Unhealthy” and have been increasing since.

According to the Indonesian Bureau of Meteorology, Climatology and Geophysics (BMKG)[4], it is predicted that rain will start in November, however the prediction is that the rain amount it will be below normal[VR1]  (see attachment – Weather prediction). Even though the local government and local institutions have been more actively engaged in firefighting this year, it is reasonable to assume by comparison with 2015, that 2019 will be another catastrophic year.

Therefore, all efforts in minimizing the risk of fire and haze are necessary especially as economic factors such as land speculation derived from the decision of moving Indonesia’s capital city to Kalimantan and palm oil concessions are at play.

During the last weeks airlines have been forced to cancel dozens of flights, hundreds of thousands of people suffer from acute respiratory infections (ISPA) and the air quality reaches unhealthy levels not just in Kalimantan but in neighboring Malaysia and Singapore.

What has been your experience in this situation?

I have been living in Kalimantan with my wife since February 2001 so we had to survive and deal with this situation on several occasions. Perhaps the most difficult years were in 2006, 2010 and definitely in 2015.

The immediate health risks of the haze involve breathing difficulties, headaches as well as ear, nose, throat and eye irritation in the short term. However, long periods of exposure could result in more severe and even potentially deadly complications and diseases, according to experts.

Due to prolonged breathing of pollutants suspended in the air, people can develop serious health problems. The health risks associated with particulate matter of less than 2.5 microns in diameter (PM2.5) are well known. These are capable of penetrating deep into lung passageways and entering the bloodstream leading to effects on the heart, brain and lungs.

This could also trigger allergies, asthma and chronic lung disease. If it goes on year after year, even those with no previous issues can get allergic symptoms and contract rhinitis and conjunctivitis.

Children are at higher risk of developing long-term issues as their exposure is magnified by their more rapid breath intakes and outdoor activities.

It is clear that there is a direct effect in our health but also in our routine, in our work, in the environment and in almost every aspect of our lives. [5]

This year is looking very much like 2015 and probably worse and that’s why we have decided to stay in Jakarta like other Rungan Sari residents that have to look after the welfare of their children.

Meanwhile, we still try to work and keep going with our activities but our priority during the last months has been to support as much as we can all those living in Kalimantan, in particular children.

Soon I have plans to go back to Rungan Sari to bring some donations for the Fire & Haze Relief Program because still there is a long way to go until the dry season is over.

In 2015, Yayasan Usaha Mulia (Foundation for Noble work) was one of the main actors in delivering haze relief in the region of Bukit Batu, which is within the scope of YUM’s work in Kalimantan. During the catastrophe, YUM and partner organizations distributed more than 3000 N95 face masks, 3000 haze emergency educational leaflets, 1000 individual oxygen cans and provided two clean air rooms with oxygen supply, 800 kits with milk boxes and smoke relief medicines. YUM also mobilized a medical team to provide assistance to the population during and post crisis, reaching 4900 people over a period of 7 months. During the phase of recovery YUM further gave assistance to the community by supplying seeds, manure and livestock for project beneficiaries to support the recovery of livelihoods.

In 2016 YUM followed up the Haze and Fire disaster work by preparing a key message and material for campaigns anticipating a future similar situation, which brings us to the present time. Today, YUM with fellow engaged partner organizations have started campaigning to reduce the risks of fire and haze happening in Bukit Batu, Central Kalimantan.

Meanwhile, the Borneo Football International Foundation since 2015 has been working with local children in education programs to protect the environment.

Since that year BFIF also has been working in cooperation with YUM to help thousands of children in Kalimantan.

This year both organizations took part in Fire & Haze Prevention Campaigns and Workshops to educate local children on this issue.

Currently both organizations are leading the Kalimantan Fire & Haze Relief Program in cooperation with the local Government, the Police Department and other NGO’s.

What are the most effective actions to take in reaction to the fires?

Prevention so in the future there is not a similar situation but that will need a lot of political support and law enforcement.
Education at all the levels about the negative impact in the environment and human lives.
Creation of a solid and efficient fire-fighters system
Relief efforts to assist in the best way possible those affected by the fires and the haze.