Fighting back with a sewing machine

Cassidy Sterling in the USA has been making face masks with the support of SD USA’s Melinda Wallis Memorial Fund grant and Subud Boston’s Charitable Giving Fund. Here is Cassidy’s account of why and how it is helping him and others.

I was watching Rachel Madd 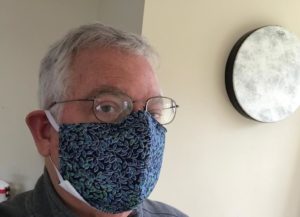 w [television presenter for US television channel MSNBC] one evening and she reported that, because of the lack of personal protective equipment (PPE), enterprising stitchers were sewing masks at home and delivering them to hospitals and nursing homes. I thought: “hey, I know how to sew! I can do that!”

I had a scrap bag with leftover cotton and the hospital a few miles down the road was soliciting masks. I scavenged more fabric from friends and family, downloaded a couple of patterns from the internet, and got to work.

I quickly ran out of supplies and decided to apply to SD USA for a Melinda Wallis Memorial Fund grant. Someone suggested that Subud Boston has a charitable fund that might also be tapped. Running on faith that the money would come through, I wrote some quick grant applications, got out my credit card, and bought a huge amount of fabric locally and from Dharma Trading (a Subud enterprise in Washington State) – and got down to serious business.

So far, I have made over 400 masks and delivered them to hospitals, nursing homes and also to neighbors, friends, and relatives. Sewing is not exactly war-like, but for me it seems to do the trick. I am doing this as my own sort of Crisis Giving – my stress level is so much lower because of it. My doctor told me that the Fight or Flight response raises your adrenaline levels, which is fine as long as you have something to do with that adrenaline. If you don’t flee and you don’t fight, your blood pressure goes up and it’s toxic. So, I’m making masks. It’s like, “Mask Quan-Do.” Two o’clock in the morning and can’t sleep? The sewing machine awaits! 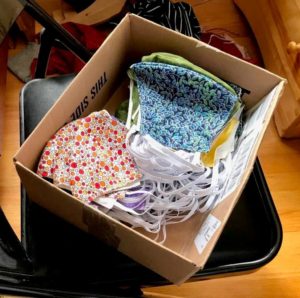 As for what effect it’s had for other people, I have been keeping a record, so I know I have made 430 masks, and then I sent them to those who need them.  I contacted the woman from Franciscan Children’s hospital and asked if she needed more, and told her that our local police department was collecting them for local nursing homes. She told me that the need was greatest at nursing homes. Then she said that thing that ALL the healthcare people I have talked to say, which is, “Thank you! This work is vital.” Doctors, nurses, the carers – they are so stressed! Contributions like this are received partly as moral support and come to them as a palpable blessing. People always say, “Our thoughts and prayers are with you.” But a mask – now that’s something you can put on and know that someone has sent you their love.