Anisha – the greening of Martalli

We moved continents again for our October SD Network Passport, and flew – with no carbon emissions – to India. Our hosts were Valli and Rajan, directors of the Anisha Foundation, which works with landless farmers, smallholders, children and families in Karnataka to improve their livelihoods.

How Anisha was born

Valli began by describing how she started working with street families and slum dwellers in Bangalore in 1995. 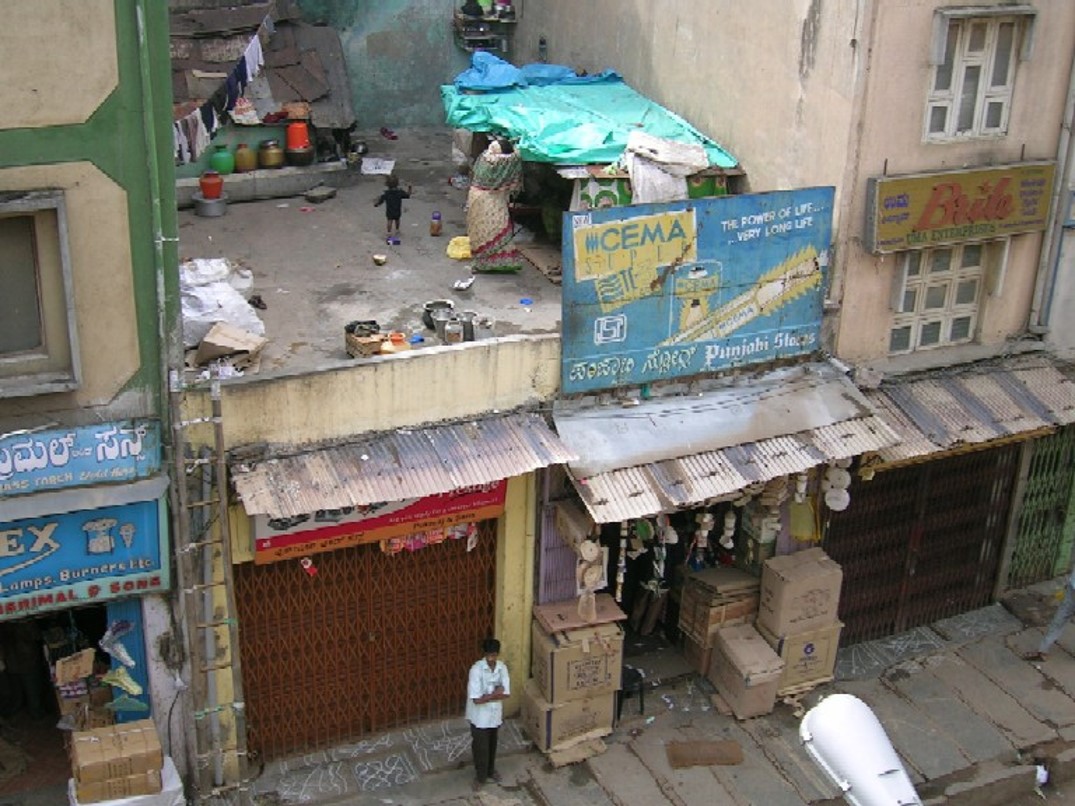 Some families in these slums lived on roof terraces, basically in small ‘boxes’ (see photo left). They would spend all day on the street, hawking, with all of their income being spent on their daily expenses.

Their makeshift dwellings had no running water or waste disposal and they would have to use public toilets. These were the poorest families, who lived on street food, with no cooking facilities or time to cook.

Valli decided to work with families made up of elderly people, single-person households, female-headed households and large households in the city centre market area.

She also wanted to work with children, who were basically left to roam the streets while their parents were street selling. The project had nowhere to operate, but Valli’s team managed to build a small classroom out of recycled building materials and they began to give pre-primary education to children aged between three and six years old. 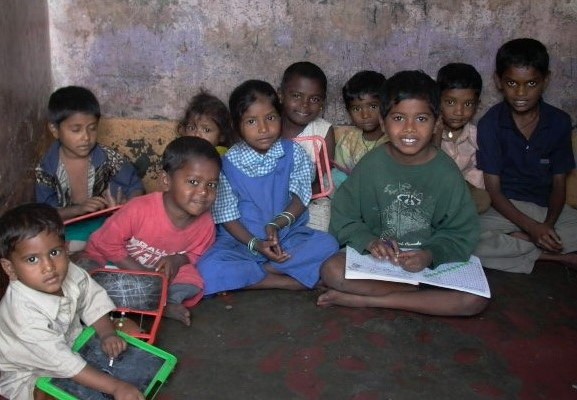 At the age of six, children could go on to government schools, or private schools via sponsorship which was arranged by Anisha.

There was also a supplementary class, or after-school programme, with 136 students attending, which supported children with their homework, as their parents – who were not educated – could not. During the time that Anisha worked with these families, there were no dropouts and all the children involved scored good marks and went up to the next class. These children were the first in their families to go to school.

Anisha’s Children’s Savings Programme helped young people to save the money they were given for the day by their parents and that they would normally spend on junk food; and there was also a micro-credit programme for women. This helped women avoid the high interest rates charged by money lenders. 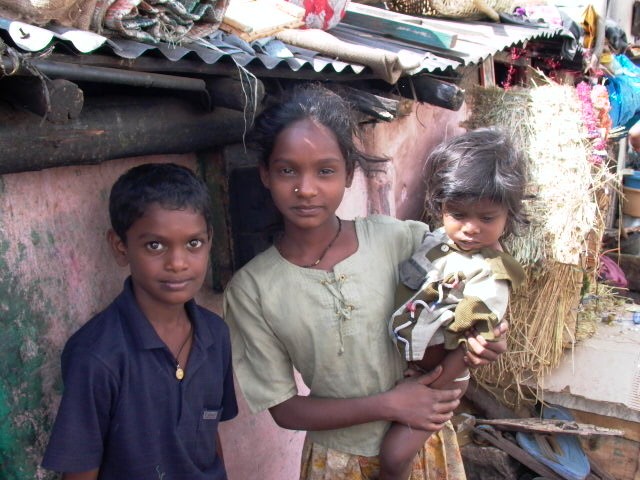 Anisha worked on this urban project between 1995 and 2008 and brought about physical improvements in the slum, including building pavements and a community classroom, enabling access to drinking water and an electricity connection to each household.

During this time, the Anisha team conducted a small research study and learnt that most of the hawkers they met living in the slum had migrated from rural areas. They visited some of the villages that people were from and discovered that agriculture was not profitable there, which was why people were migrating.

This made them think: “Why don’t we address the root causes?”

Back to the roots

In the second part of the webinar, we watched a short film that set the scene of the rural environment that Anisha started working in and where it continues to operate now. 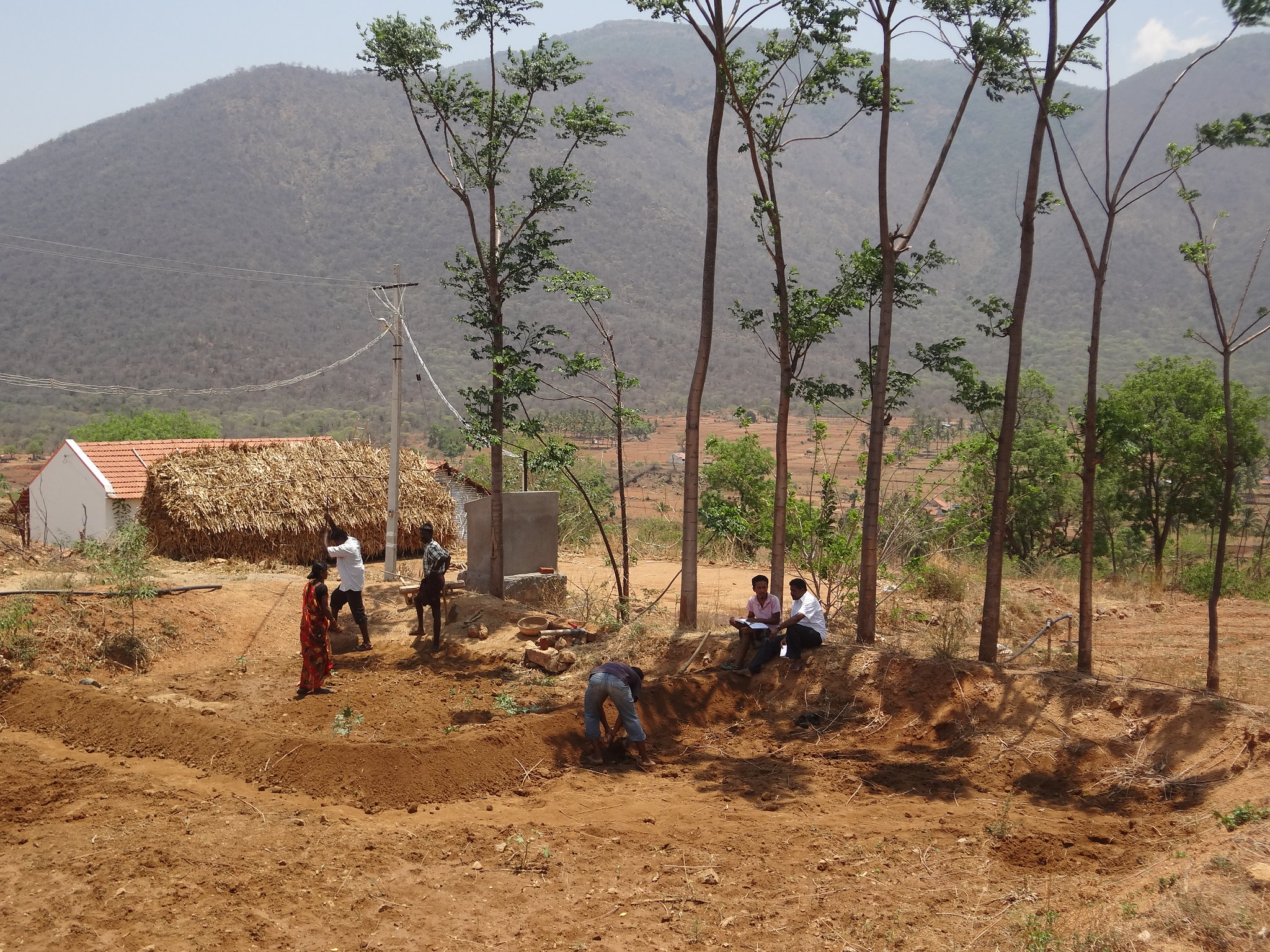 “Martalli, surrounded by mountains and forest. The area is stuck in drought and cursed by nature,” the narrator tells us. It is a ‘rain shadow’ area, which means that there is rainfall on all sides, but much less in Martalli itself. Apparently, in the past, villagers at the foothills could get by with minimal agricultural activities and the water flowing off the mountains was sufficient to fill wells and ponds.

However, a series of events occurred that led to the degradation of agricultural conditions. First of all, tribal people living in the mountains migrated from their villages because of the construction of the Mettur dam in Tamil Nadu.

In the valley, forest was cleared and cultivation started. At around the same time, maize was introduced to the area and villagers were sold the dream of a lucrative cash crop by the company selling it. Gradually, as people pumped water for these crops, the groundwater level decreased, and the fertility of the soil was damaged as people were encouraged to use pesticides. 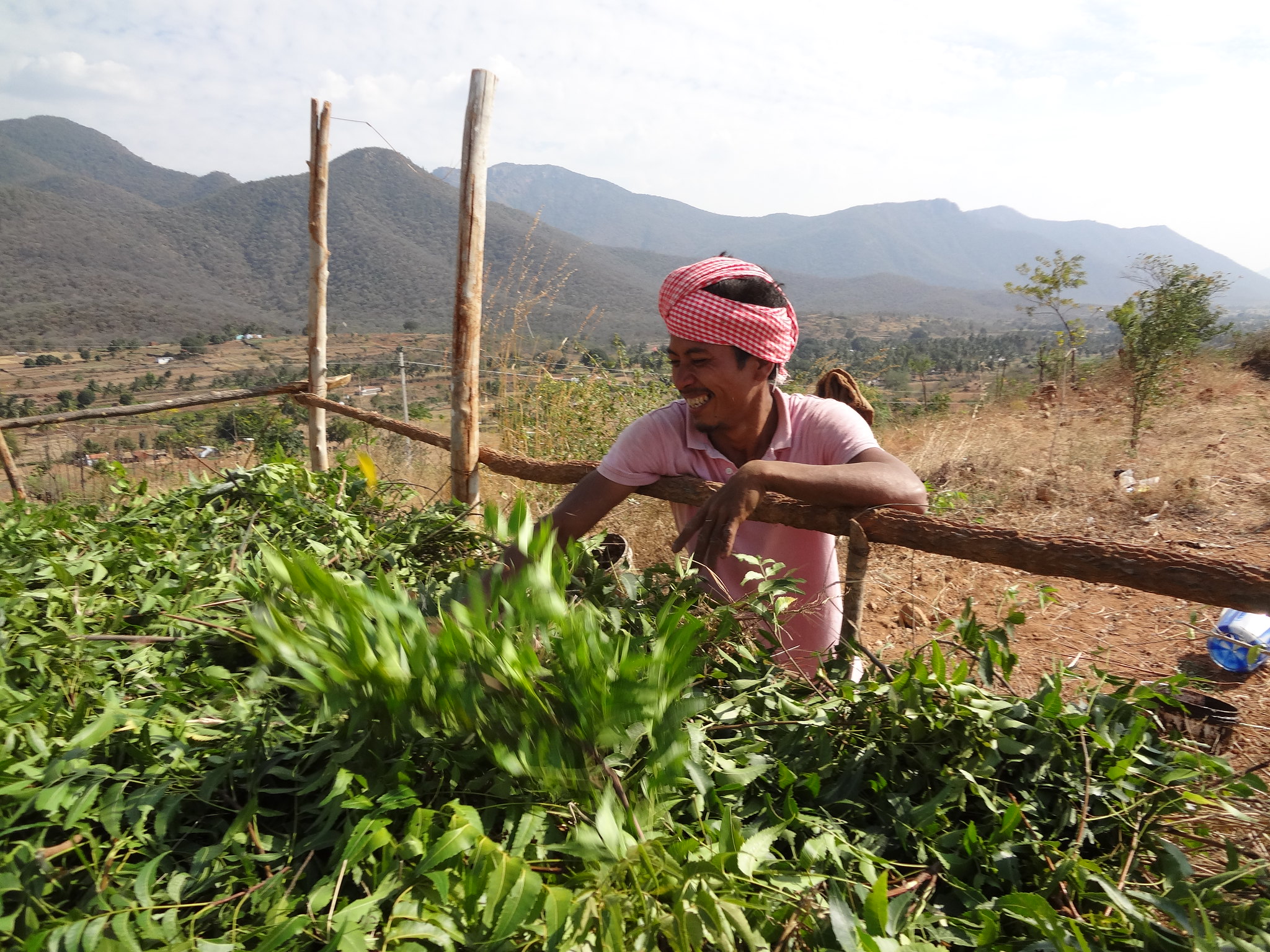 In 2006, Anisha started its work in Martalli Panchayath, Karnataka State. They reached out to small farmers and began raising awareness around organic and natural farming methods, with the aim of improving livelihoods and helping to curb migration.

Their training began at village level with demonstrations in local fields, motivating smallholders to do trials on their own small plots. At first, farmers were doubtful but then they saw the positive results, bringing them good yields with less expense.

The next step was the collection and conservation of native seeds. Anisha has also helped with removing huge stones from their land, the construction of vermicompost tanks, drums for the preparation of organic fertiliser, organic pesticides and sprayers. 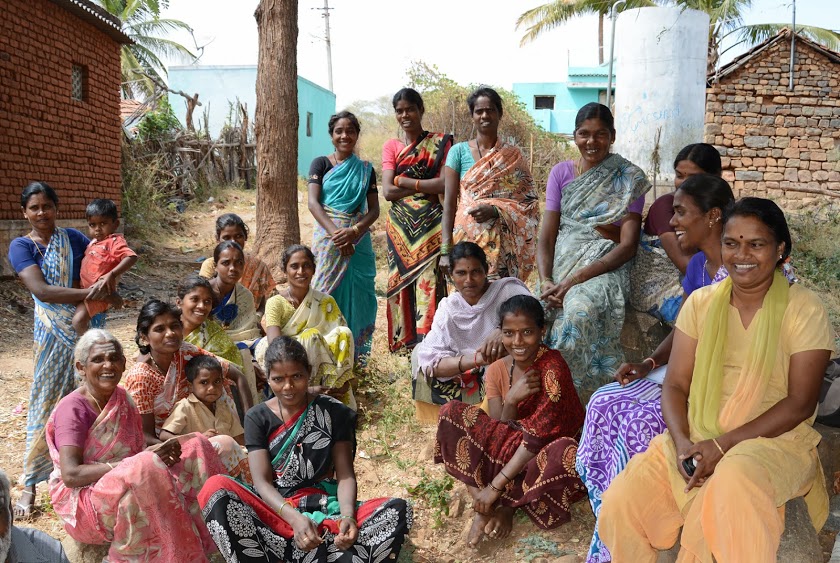 Another of Anisha’s initiatives has been self-help groups for women, with savings and credit provided with minimal interest. Women’s entrepreneurial initiatives include livestock rearing and making medicinal products, and food products for functions and events.

The Anisha resource centre houses the seed bank and is a training centre with demonstration plots that show how it is possible to cultivate on rocky patches of land using minimal water. It is powered and lit by solar energy and biogas, and utilises rainwater harvesting.

How has Anisha grown over the years? Up to now it has trained more than 2000 farmers, covered 200 acres of both dry and wet land, conserved 306 varieties of native seeds, and engaged 1800 students in kitchen gardens.

After the video, the floor was opened for comments and questions. Hillel Natanson, former SDIA volunteer, commented that he had seen Valli give a presentation – using bits of paper – in Bangalore in the early 2000s. Seeing the light in Valli’s eyes he had said to himself: “This woman is going to do great things”.

The third part of the visit took us to Anisha’s Kitchen Garden Project, starting with another short video. 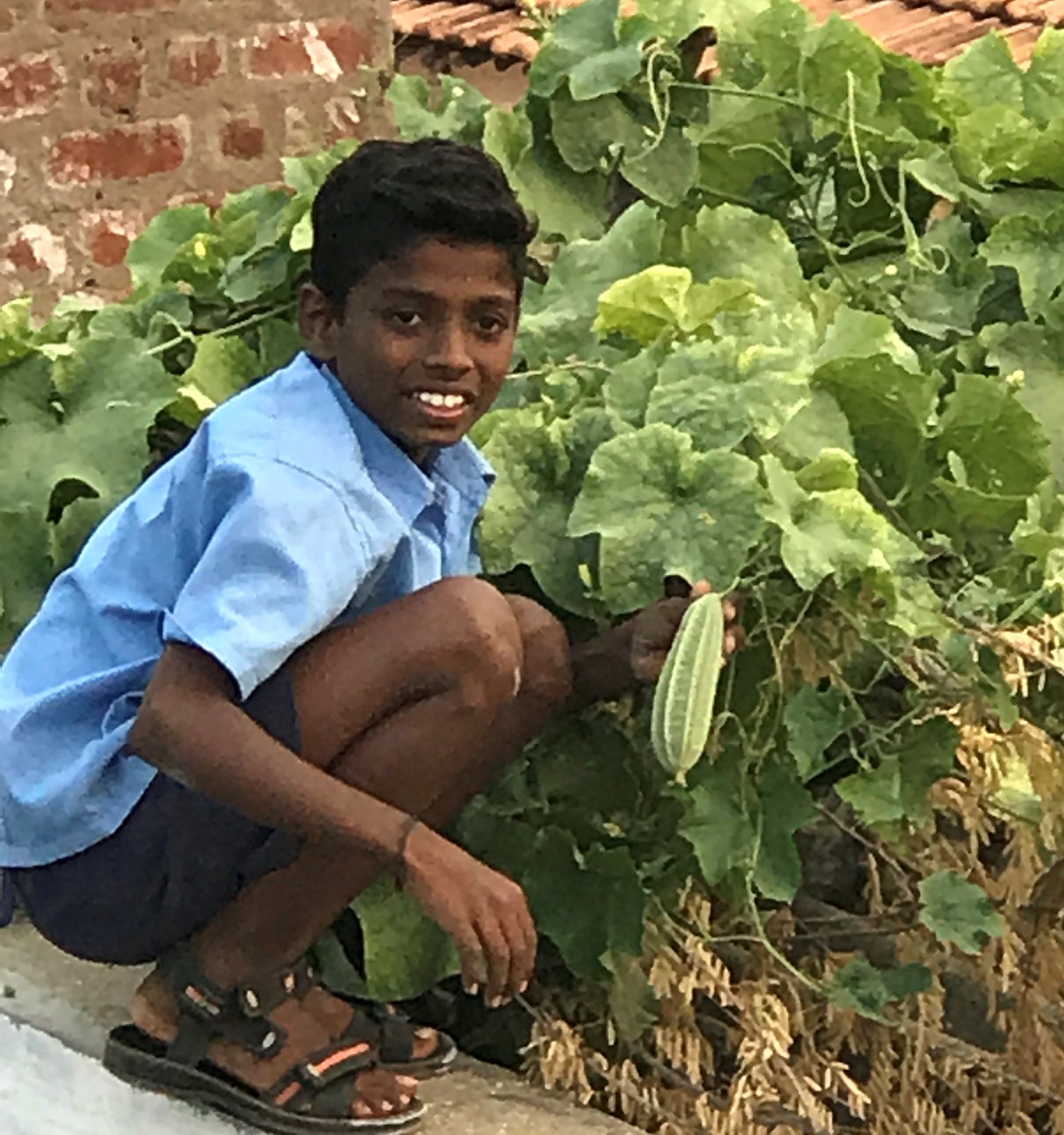 The organic Kitchen Garden project began in 2013 as a pilot in 16 schools. The project had several aims, including halting child malnutrition, signs of which – such as children reading by holding the text close to their eyes – were evident in the local community.

When the project started up in school in 2016, children were hesitant to get involved at first, but the participation of teachers, constant guidance and training from Anisha and the children’s natural curiosity has made the project a success.

It started with 16 schools, with demonstration gardens that showed what it was possible to grow in a small space, and taught children that just like humans, the soil needs the right nutrients to keep it healthy.

It faced challenges, of course. Teachers had to sacrifice classes to Anisha, but involving them in the planning process brought them on board. 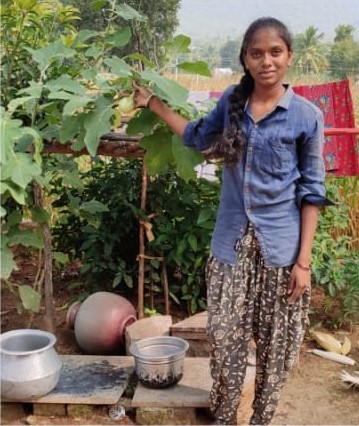 Young participants in the scheme said that eating home grown produce gives them joy, and that organic fruit and vegetables taste better. Not only this, families save money on food which can then be spent on other things. Vegetables from the kitchen garden even go into school dinners.

In conclusion, this project is not only about growing vegetables and improving the nutrition of families but it also frees up income for other things like school supplies etc. It spreads the news about organic farming, as neighbours share seeds and their new knowledge about natural farming. In addition, according to Valli, the project gives children the chance for some ‘peace and solace’ in a natural environment, thus enhancing their mental health and wellbeing.

All this, plus its life-saving impact during the pandemic when families were able to feed themselves with vegetables grown in these kitchen gardens.

Following the video, Marilyn Shirk commented that she has visited the project in person but that to see it all brought together and to witness what just a few people have managed to do to bring about change in a specific area gave her a lot of hope – and that what Valli is doing in this area is unique and inspiring.

Seeds have been planted

The fourth and final part of the webinar was about Anisha’s most recent work during the coronavirus pandemic, including its relief efforts. 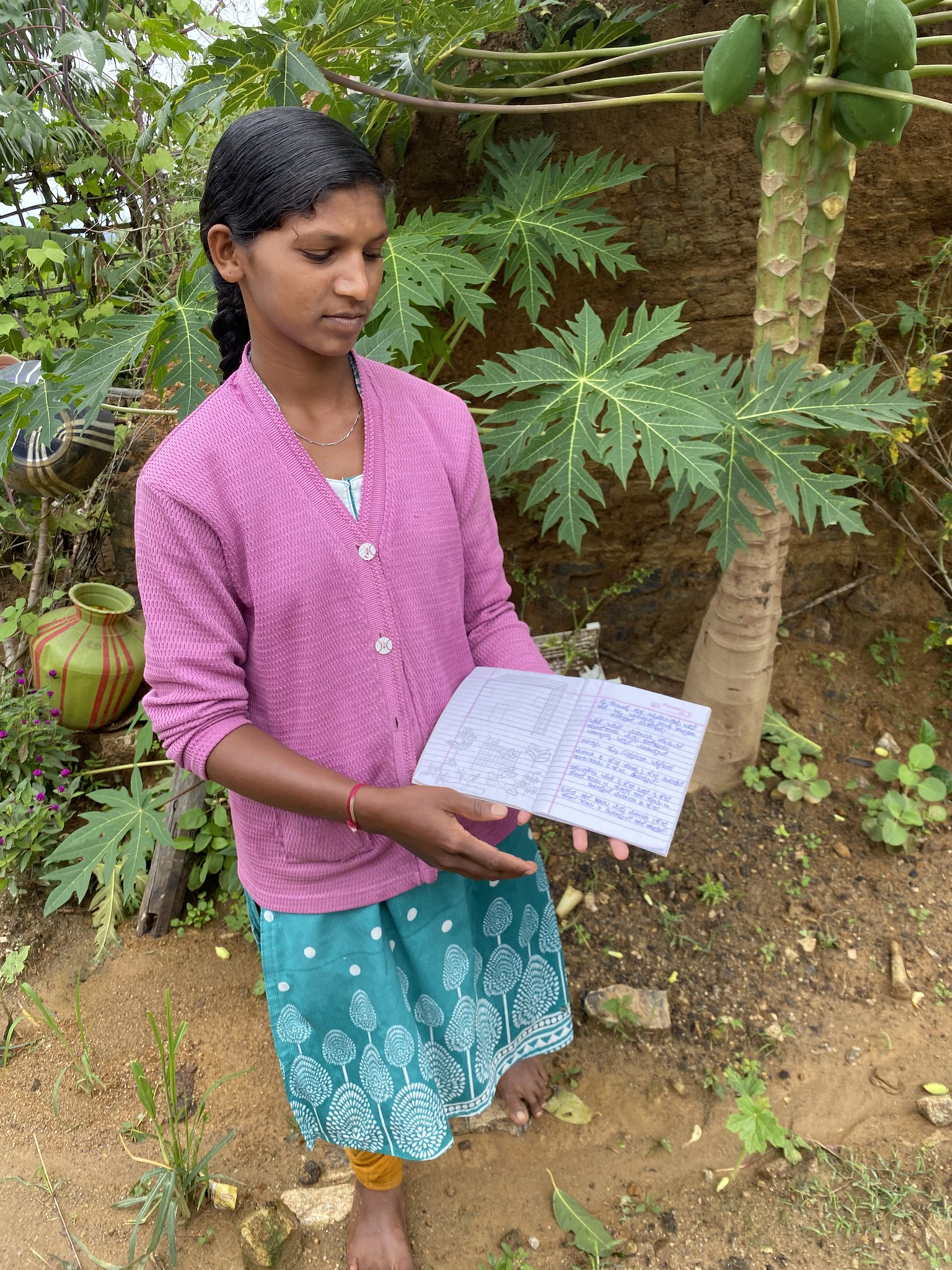 When the pandemic started, Anisha was working in 23 schools and was meant to end its cycle (funded by the Guru Krupa Foundation and SD Nationals) in 2020. However, the project could not be completed properly because Covid made outreach impossible and the Anisha team was limited to working at the research centre.

Despite this, because some students had phones at home, Anisha started contacting them by phone to give advice and check how things were going. A lot of young people even expanded their gardens during the pandemic and started growing more varieties and giving seeds to neighbours. They had come to depend on the gardens for food when the shops were closed, and a lot of workers had come back to the village from urban areas.

This is when the importance of the home gardens was fully realised. People had no work and no income – but at least they had vegetables from the garden.

In the initial stages of the pandemic, Anisha wasn’t sure how they were going to help. It was impossible to help entire villages, because the need was too great – everyone was in the same situation. Anisha identified families where there were COVID cases or where there were people in need because the household had suddenly increased, and they supported families with food relief provided from donations from the Susila Dharma network and Guru Krupa Foundation. Over 3,000 families in 21 villages were supported, and the relief work has continued this year.

Medical support was also a problem. It takes three hours to get to the nearest hospital from Martalli, and even when you get there, there are not enough beds. With many people suffering from heart disease in the area, Anisha had already decided to purchase an ambulance to address this medical accessibility problem. The ambulance arrived in March 2020 and was used immediately for COVID patients. Anisha considered hiring a driver for the ambulance, but no-one came forward, so Rajan took on this role.

School has now started again. During the pandemic, the relationship between Anisha and students grew and developed because of the increased contact by phone, whereas before when the Anisha team would visit the students’ homes, only the mother would be there. The kitchen garden project will continue and expand to other schools in neighbouring panchayats next year, if the Covid situation is under control.

During the final minutes of the webinar, attendees commented that it was very powerful seeing Anisha in this way, even if they already had previous knowledge of the project.

Suzanne Renna asked whether planning for the future was taking into account the challenges of climate change. 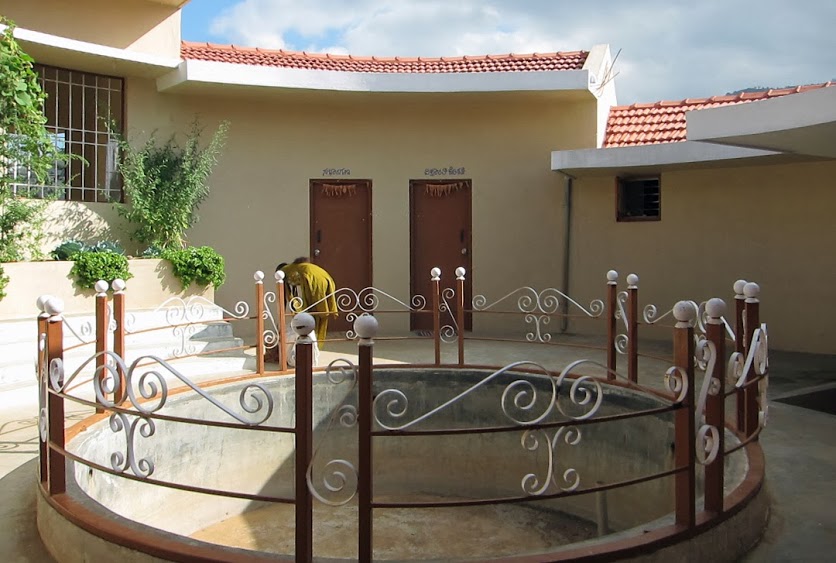 Valli replied that rainfall is a problem. Either there is not enough rain or the rain is too heavy – every year there is a problem.  Rajan said that they have been talking with government departments about climate change, promoting tree planting and reducing plastics. During the pandemic, relationships with government departments were strengthened.

Michelle O. Fried said that she was impressed with the integrated way of doing the project – looking at the root causes and addressing the problems at the source. More than anything, she said, “I’m inspired by how you are working with children and we are going to look at doing this ourselves with local schools.”

The question of financial sustainability was raised. Valli said that the Resource Centre was somewhere they could farm and also offer visitor accommodation. However, the income from this was not yet sufficient to allow the project to function without outside funding.

Deepak – Valli and Rajan’s son – said he was inspired by his parents’ work and likes gardening and sharing native seeds among his friends. A seed has been planted!

You can watch and listen to the whole visit here: