For our fourth SD Network Passport session, we were hosted by I Protect Me, South Africa, and joined by project leaders, local authority representatives, school staff, young participants, prevention workers, academics and other supporters, in person and via pre-recorded videos.

The session was introduced by Cindy Martins, IPM’s new Programme Manager who led us into a first video outlining the background of I Protect Me (IPM) and giving a glimpse into IPM’s activities in schools and some feedback from the school children and teachers involved.

Cindy – who has been working with IPM for five years in various capacities – thanked supporters for both their capacity-building and financial aid, adding that the project would not have been able to launch their after-school programme without this support. She also mentioned the recently-acquired vehicle, financed by SD Britain, which enables them to widen their reach and carry out activities in more places. IPM currently operates in nine schools: three secondary schools and six primary schools. 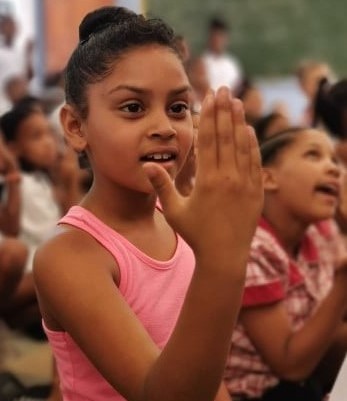 IPM’s method starts with a social map, connecting the various stakeholders. Cindy highlighted the importance of NGOs working with different stakeholders rather than in a silo, and IPM has a growing number of non-governmental and institutional partners in South Africa and abroad.

For example, the South African Department of Social Development is now acknowledged as a serious partner, approving grants for five field workers for a year. Other partners include Nelson Mandela University, the Department of Education – they endorse in-school activities and have an NGO forum that will link IPM to 18 other NGOs – the South African Police Service and Rape Crisis.

A few recent IPM highlights include a training intervention for people with disabilities encompassing computer training and victim empowerment, and the training of 200 women and girls during Human Rights month (March) this year.

After this overview of the current state of affairs, Monica Clarke, the founder of IPM, took up the baton, starting with a quote from IPM’s new chairman, Randall Maarman: “We’re going to be here for the next 100 years”.

Monica thanked her husband Hedley, patron of IPM, for having supported her uncomplainingly over many years and then went on to outline the many miracles that helped shape I Protect Me.

In 2011, Monica read a news item about a young girl who was raped and killed and then dumped, like rubbish, in Western Cape. This reminded her of the abuse she suffered herself as a young woman and how afraid and powerless she felt – even though she was a professional woman and the family’s breadwinner. Her conclusion was that she and millions of her fellow countrywomen had been culturally brainwashed not to speak out – “not to air our dirty washing in public”. 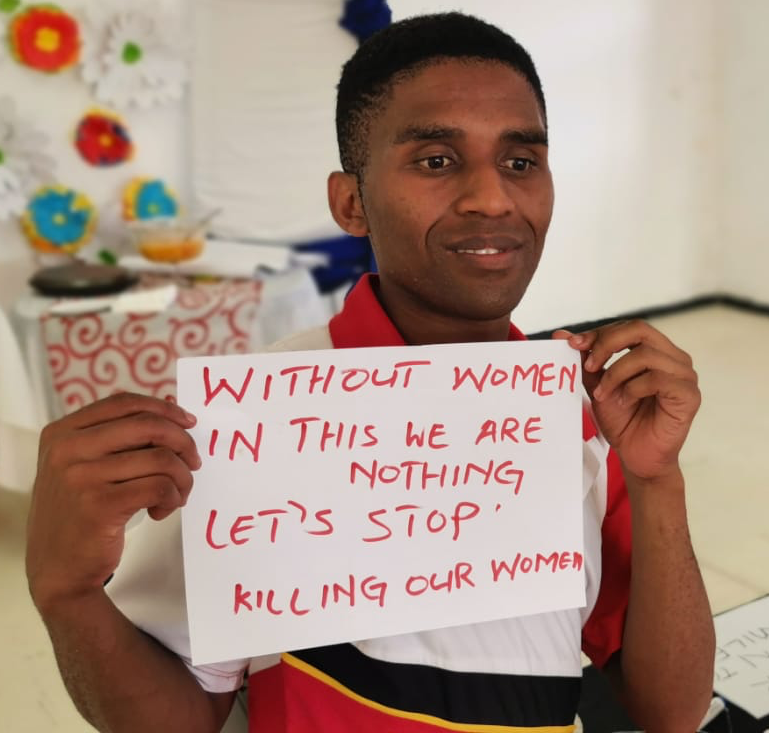 She wrote an article on World Pulse about this, expressing her strong feelings about schools not being the places of protection that they should be, and her desire to do something about it. Following this article, she was overwhelmed with responses and among them was an email from Duncan Bomba in Nairobi, Kenya, who offered his help, saying “We have been doing this for years.”

Duncan was the head of Dolphin Anti-Rape and AIDS Control Outreach. When approached by Monica, Arnaud Delune (at that time Chair of SD France) agreed that SD France would finance her to go to Kenya and discover what Dolphin was doing, and learn about their self-defence techniques and their programme for primary school children.

In 2013, I Protect Me was registered as an organisation in Cape Town, and Monica and Hedley travelled to South Africa. When they found themselves stranded on their arrival, were picked up from the airport by an old acquaintance, Father Brian Beck.

Father Brian (via pre-recorded video) said that on hearing Monica’s story, he realised that Monica was looking to him to help. He offered her accommodation where he was living so that she could realise her dream of fighting back. She launched this project in a culture where children were left alone all day because parents had to go out early in the morning and return late at night due to long working hours. According to Fr Beck, this is why abuse has taken hold and is perpetuated – children are so often left to their own devices and easy prey to the adults that surround them. 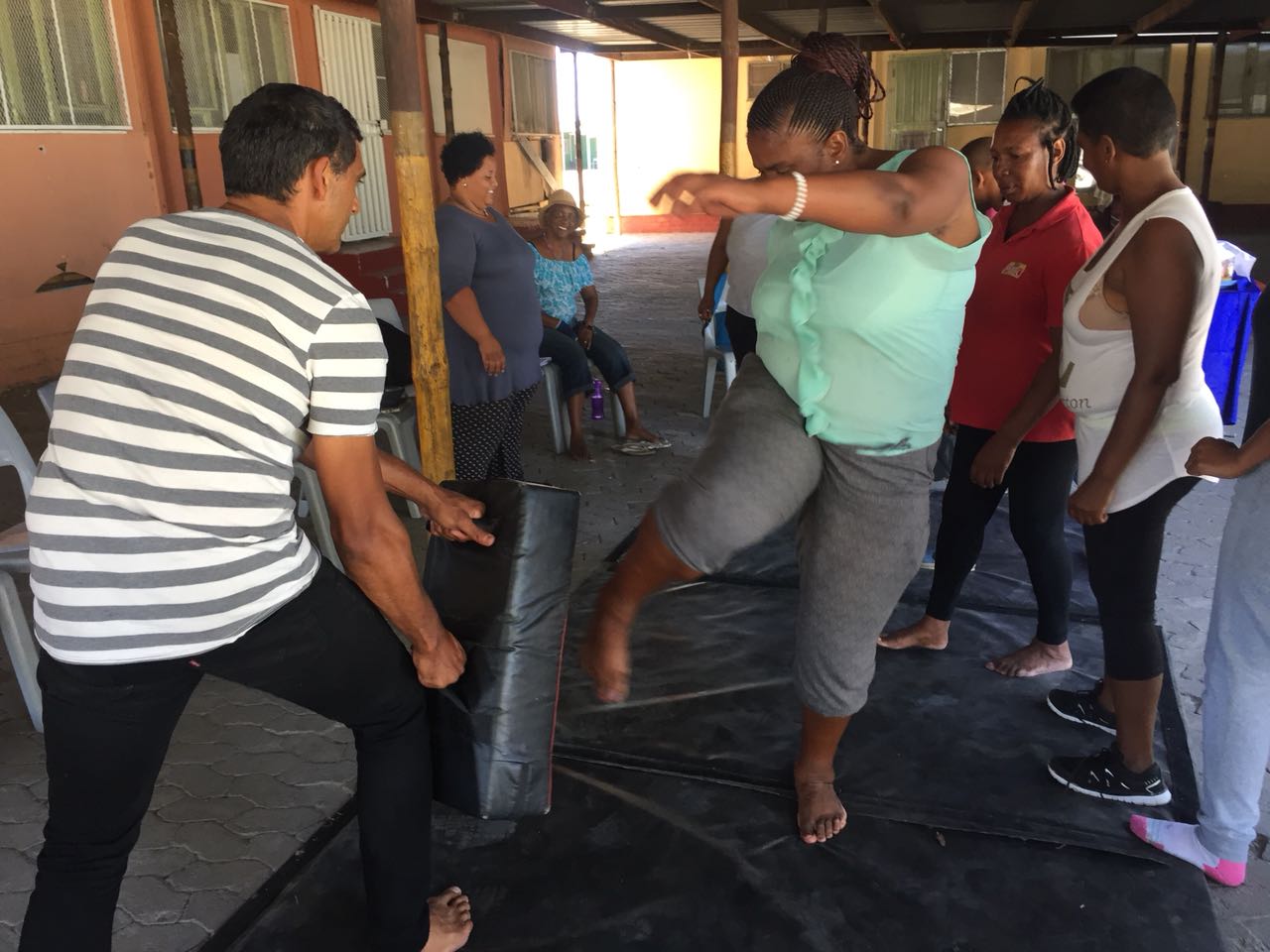 The next step was learning how to work with teenagers, but as Monica and IPM had no experience with this, they got in touch with Wijs Weerbaar, a self-defence school in Groningen in the Netherlands, where Director Marieke van Veen did everything she could to help them get a team to Holland to attend their training.

In 2010 Marieke had conducted some training in South Africa for people with disabilities. She had been shocked by the sexual violence and bullying her trainees had come into contact with, and how this violence permeated society. She had come home deeply shocked at the sheer levels of abuse in South Africa, and this is why she felt moved to help IPM.

The next serendipitous encounter was with Randall Maarman, a young South African living in the Netherlands who emailed Monica about an article she had written. They met up while Monica was in Netherlands, and shortly afterwards, he told her he was moving back to South Africa and wanted to get involved with IPM.

No sooner had he arrived back in Port Elizabeth than Monica requested him to get a team together and start working for IPM, which he did.

The final testimonial in this part of the IPM story came from Dr Bruce Damons from Nelson Mandela University. According to Monica, this university is home to “academics who actually see the problem and enter into it.”

Dr Damons said: “We are a partner with IPM. We realised as an institution that we cannot do it all alone, that the spaces of learning are the people on the ground. Monica is the university of life.”

He went on to speak about allowing different knowledges to converge and create collaboration – rather than competition – in order to create a better society in which everyone can fulfil their potential. He also said that ideally this would happen in a reciprocal way, recognising that everyone has something to give but bearing in mind that some have more resources than others, especially in the most unequal country in the world.

Moving forward as a team

Next to speak was Randall, who is now Chairman of IPM. Randall thanked all the people who have supported IPM up to now and said that it is a real team effort, but that this was because “Monica has gathered an army of people around her.” 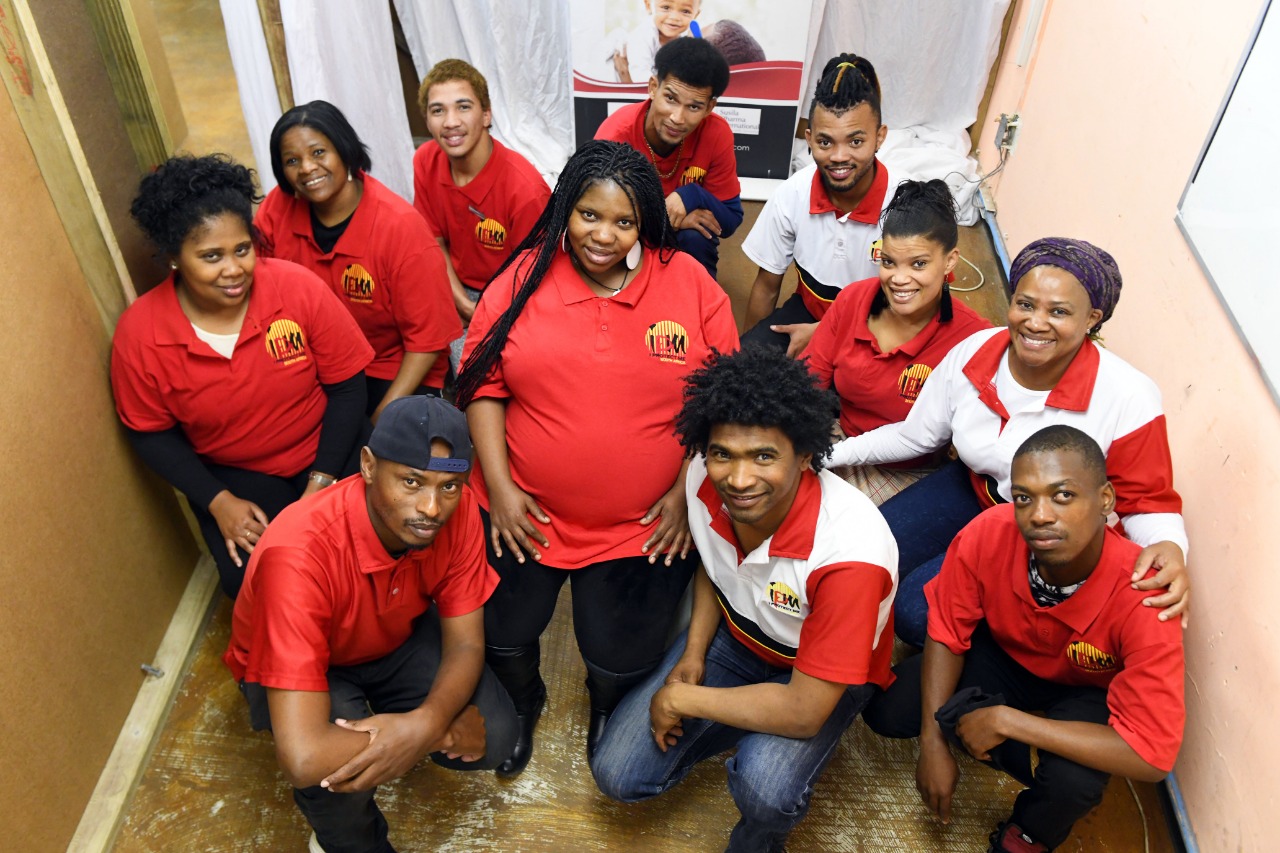 Monica had once said to Randall: “The younger people have to take this forward,” to which he replied: “We are ready.”

Another word of thanks went to Billy Paulson who has given IPM an office in a shopping mall and has paid the office rent. Billy replied that he was very happy that Monica was finally getting the credit for all her hard work and immense dedication.

A second video was screened which introduces the current Prevention Workers and outlines the panorama of their current work: a peer-to-peer programme, victim empowerment and an after-school programme in several under-served areas where prevention is introduced using art and craft activities.

In the video, IK Martins, principal of Booysen Park Secondary School – one of the first schools to open their doors to IPM in Eastern Cape – testified that IPM addresses their mission to empower young people; while Cosmo Bartman, coordinator of Sport, Music and Safety for the Nelson Mandela District underlined the importance for him that IPM be part of the NGO Safer Schools Forum.

The presentation and interventions by a wide range of people was followed by a short question-and-answer session, which was also a forum for comments and feedback.

Steve Podmore: What kind of support do you need going forward?

(Steve Podmore, from the UK, signposted IPM to an African organization called Gold Youth, which specializes in Peer-to-Peer training, with which IPM subsequently partnered. They give IPM training support and resources to facilitate peer-to-peer training in schools.)

Monica: we need buy-in from businesses who could get their workers trained so that they are safe on journeys to and from work.

Randall: thanks for making the connection with Gold Youth – we are using their peer-to-peer youth empowerment programme. Making more connections with networks can help us move forward. 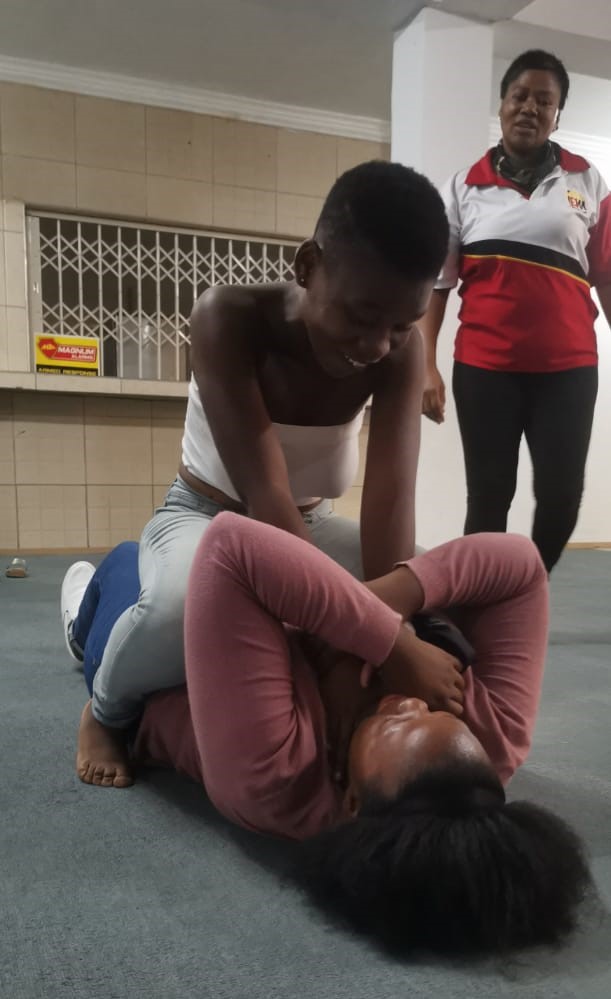 Helen Muñoz: Have you encountered any resistance to change from the parents?

Monica: The only experience of resistance has been when one of the mothers pulled her daughter out of the line ready to go into a church for a training session because she was Muslim. From that we learnt that we had to use neutral ground for their training.

Prof Paul Stanton (Monica’s ex-boss at the UK National Health Service): Although the initial focus was on I protecting me, there is also an impact on the schools, societies and cultures. So in the end people are protecting others and not only the individual self. Communal and community focus is sowing a seed that can grow in many different directions.”

Monica: Yes, research has proven that where we learn to be resilient and stand up to ourselves, we will also stand up for our mates and even for strangers.

Monica: As far as I know, there are no other organisations in South Africa where resistance and resilience in schools is combined with physical self-protection. Having said that, the programme didn’t come out of thin air, it drew on difference sources of inspiration, including academic research. But IPM took resilience training off the paper and put it into action.

What makes us different is that we do not offer one-off workshops, but a whole programme. Research has shown that repetitive learning changes behaviour. Creativity is important too.

We have many success stories such as a girl who told the teacher that she used IPM’s techniques to get her out of a potentially dangerous situation when a group of men accosted her as she got off a bus.

Ending with a boogie

The session ended on a high note as we played IPM’s extremely danceable song.

You can watch a recording of the whole session here: